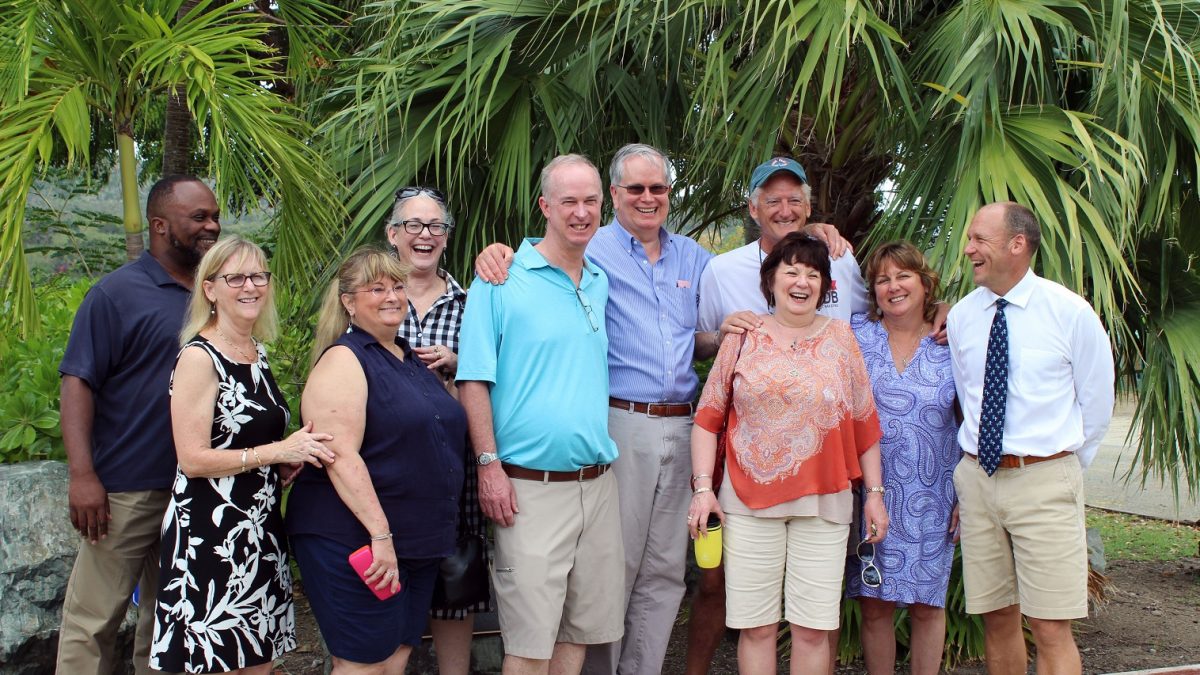 What a remarkable school year this has been! Despite the enormous challenges of enduring two Category 5 hurricanes in two weeks—and the last few years of a down economy for St. Croix in general—we have made remarkable progress here at Good Hope Country Day School. We have been thrilled and proud to have the support of so many alumni along the way (including an energizing group of GHS ’78s visiting campus Monday!). Thank you!

Whenever I feel a hint of frustration, I simply think back to last fall and I become enormously grateful for how far we have come since September 20. As you may know, here is a quick recap:

·         We re-opened nine days after Maria despite no power, no phone service, no connectivity, limited water, and a depleted staff. (The attached photo shows our remarkable Class of 2018 two weeks later—the epitome of grit.)

·         We quickly projected a $1M hit to our tight $4.5M budget—and swiftly covered most of this shortfall through the largest gift in the School’s history, a 10x increase in trustee giving, cash reserves we had consistently set aside the last two years, and immediate cuts to payroll.

But merely bouncing back from Maria is not good enough. We are committed to providing the students of St. Croix with a world-class education, and we have been striving to be Better After Maria (BAM!). The following examples are a testament to our efforts:

·         We now have back-up power on 14 of our 17 buildings (vs. 5 Pre-Maria), ensuring minimal disruptions to learning despite continued 1-2 power outages weekly.

·         We have provided excellent intensive training for our lower and middle school faculty in College Prep Math (CPM) and Bridges, our exciting new math curricula—and we recently hosted a record 100 K-5 parents for a math morning workshop that received rave reviews.

·         We held our first Independent Learning Lab Expo earlier this month to celebrate our pilot program of personalized student projects and studies, including financial math, coding, and advanced German.

·         We followed the Harvard Graduate School of Education’s protocol for Instructional Rounds in the upper school, the first time we’d enabled peer classroom observations as part of professional development.

·         We hosted weekend island-wide tournaments in soccer, basketball, cross-country, robotics, and flag football, providing venues, referees, supplies, and more even when we did not have a team involved.

·         We have a new VOIP telephone system with greater functionality and reliability, plus this will save us $5k per year going forward.

We will only become a world-class school if we engage all of our talented alumni throughout the country and the world in meaningful ways—helping connect you with the School and with each other. On that note, I recently enjoyed hosting a brunch for alumni in Atlanta, marking the fifth city where we have held an off-island alumni event (New York, Washington, D.C., San Francisco, and Miami were the others). As you read the articles below, I hope you will make your own meaningful connections with other talented graduates.

Our youngest graduates, in the meantime, are reporting back from their first year away, and we are delighted with their updates. At least several students, attending top institutions, are earning nearly all A’s. We are proud to know that our graduates can compete with anyone in the world.

One immediate way you can help is by making a gift to our Annual Fund. We are hoping to secure at least 400 alumni gifts of $50 or more. This would represent approximately 20% of our alumni population and provide a huge boost to our overall advancement efforts. I hope you will see that an investment in Good Hope Country Day School is a solid investment in St. Croix.

Please let us know if you would like to visit the campus—we’d love to show you around!

Good Hope and Country Day alumni joined GHCDS head of school, Kari Loya, on March 3 for brunch at Negril Village, a Caribbean cuisine hot spot located in a renovated historic fire house in downtown Atlanta. Alumni shared their own journeys from after high school graduation and several recounted their experiences living through Hurricane Hugo. They also spoke glowingly of the impact many of their former Good Hope and Country Day teachers had had on their lives. That included Dr. Mary Jane Provost teaching math at the Good Hope campus (and who taught part-time in 2015-16 at the GHCDS campus) and Roger Summerhayes teaching Chemistry and science at the Country Day campus. The gathering marked the fifth city in the last two years where GHCDS alumni have met for a reception with school leadership: Atlanta, Washington, D.C., New York, Miami, and San Francisco. We look forward to connecting with more alumni ahead! 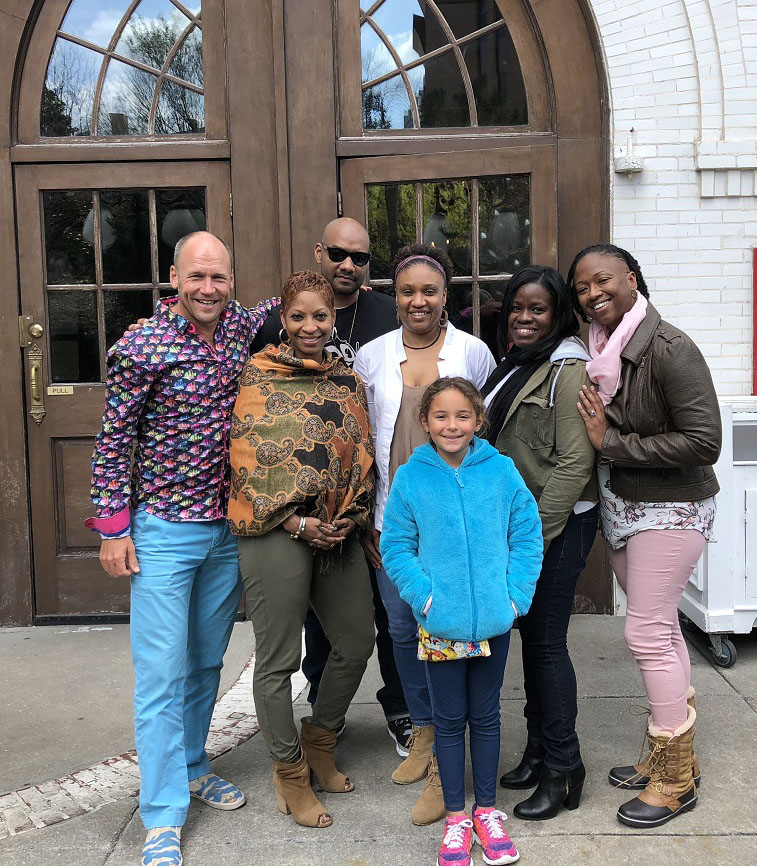 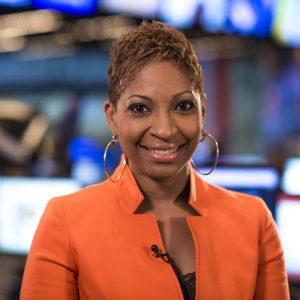 Audrey Irvine has worked in the media industry for over 20 years at some of the biggest industry leaders including CNN, ESPN and ABC News.

In her current role as Senior Director of Newsource Newsgathering, Audrey oversees the affiliate news-gathering operation at CNN Newsource that services over 1,000 domestic local stations including Alaska, Canada, Hawaii and Guam. In partnership with our affiliate partners, this department services the coverage needs of all CNN platforms, programming and partners.

In December 2011, Audrey joined CNN.com as U.S. Editor. In this role, Audrey shaped the strategy and also lead the daily effort to publish a dynamic, engaging, national news section. The U.S. Editor was tasked with working closely with others within the CNN organization at large to break news, make news and create unique, compelling stories.

Before joining CNN.com earlier that year, Audrey was promoted to manager of the newly created Webcom Desk. This digital arm of the national desk was formed to specifically deal with marketing the best affiliate coverage from across the country to CNN.com users nationwide.

In 2003, Audrey joined CNN as a national desk editor where she achieved many accomplishments. .

The 2008 presidential election was a historic moment for the woman CNN introduced to the world, Mrs. Ann Nixon Cooper. Audrey first met Mrs. Cooper when she was 103. Years later at 106, Cooper questioned why she lived this long, then realized it was to vote for a black man for president. Hearing this, Audrey felt CNN needed to tell her story. CNN anchor Don Lemon interviewed Mrs. Cooper, even accompanying her during early voting. Mrs. Cooper became part of history when newly-elected president Barack Obama mentioned her in the final minute of his acceptance speech. To witness one woman become forever associated with this historic election remains one of Audrey’s proudest moments as a journalist.

Audrey has produced key coverage for CNN air, including post Hurricane Katrina coverage from New Orleans where she won a Peabody Award.

In 2007, the ‘Jena 6’ story was a landmark achievement since Audrey was the one who brought the story to the national forefront and attention of CNN.

As a result, CNN was the first national broadcast network to air a story on the plight of the ‘Jena 6’. Audrey remained in the forefront of continued ‘Jena 6’ coverage including the historic march on Jena up until Mychal Bell was released from prison.

Before joining CNN, Audrey worked at ESPN, the premier 24 hour sports network, as an assignment editor. In her six years working there, she contributed to Emmy award winning programs SportsCenter, College Gameday and Sunday NFL Countdown where she covered two Super Bowls.

Audrey started her journalism career at the ABC News Southeast Bureau as an assignment editor where she was involved in award winning coverage of the Oklahoma City bombing, the David Koresh standoff in Waco, Texas and the Olympic Bombing at Centennial Park.

Audrey has a Bachelor of Arts in Mass Communications from Clark Atlanta University.

In March, GHCDS Head of School Kari Loya, attended the NAIS Conference in Atlanta Georgia.  While there he  was able to reconnect with Carole Everett, former GHS Head of school.  She is currently Executive Director for New Jersey Association of Independent Schools and is a wealth of information and contacts. 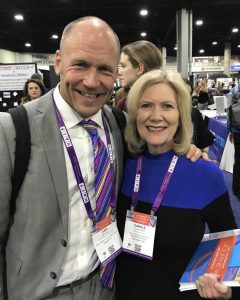 Former teachers, Dr. Betsy Gladfelter & Theresa (Castagno) Harper reconnect at GHCDS.  Dr. Gladfelter served in a number of capacities from Librarian to Upper School Dean from ’93 –’97.  She currently lives in Wood’s Hole, MA and is the Guest Investigator at Woods Hole Oceanographic Institution; Falmouth conservation commissioner, and Coordinator of the Coonamessett River Restoration Project for the town of Falmouth. Ms. Harper was LS/MS Spanish teacher from ’93- ’09 and still coaches the GHCDS Cross Country Team! 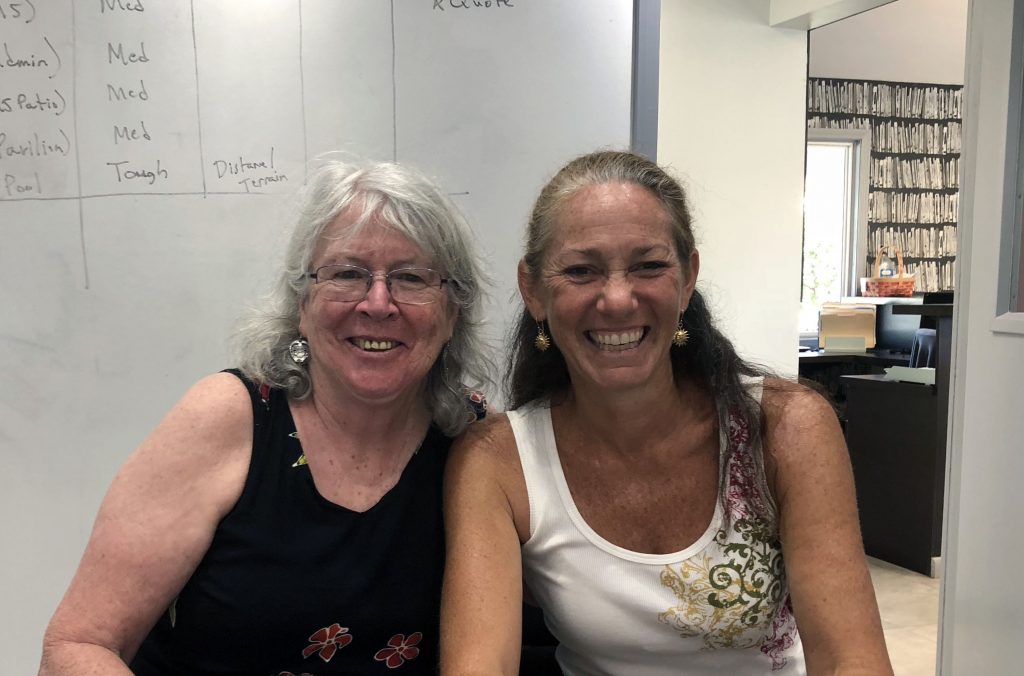 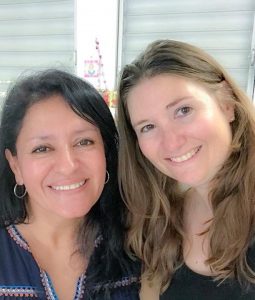 In writing this, I’m realizing that I graduated over ten years ago, in 2007! I left the island to attend Wellesley College, just outside of Boston, then moved into the city after graduation. I haven’t yet left Boston, although my annual trip home each Christmas makes that idea a bit more appealing…

I am a CDS lifer, starting from first grade, and I’m fairly confident that anyone who knew me would (still) associate me with books, as I always had my nose in a book. I’m so grateful to all the teachers who were content to let me stay in their classroom
at lunch break and read, instead of playing on the slab. Extra-special shout-outs to Mrs. Yoder in third grade and Mrs. Walt in fourth grade!

Looking back, it’s incredible how GHCDS teachers go above and beyond the 8-3 school schedule as willing listeners, participants and collaborators in our newest ideas. Ms. Wilson helped launch Interact Club, and one year Ms. Grey was willing to lead a group of us on a one-time Habitat for Humanity trip to Florida, including being the 15-passenger van driver six hours each way! I can’t imagine how many more all the teachers have been involved in over the past decade, especially with the National Honor Society and Mini Gusto.

I’m grateful for the creative license and autonomy teachers and the administration provided us as individuals and a class, holding us responsible for our own collaboration and fundraising to accomplish our goals. Being a part of that entrepreneurial environment helped me develop the confidence and drive to launch new initiatives in college and establish unconventional summer internships for my professional career.

Today, I live in Boston and work as the Marketing & Communications Manager for the largest homeless day shelter in Massachusetts, located in downtown Boston. No matter where I cross paths on island or stateside, there is always a smile and warm hug of recognition. That’s something really special.

GHS Alumni and alumni family visit the GHCDS campus! So many wonderful memories and stories were shared while reconnecting with each other including GHCDS Math Teacher – Maurice Barrant, GHS’83.

“Leaving St Croix… what a wonderful, perfect time we had…  Celia Bou, Gregg Billman, Dania Douglas Billman, Sallie Bauckus Best, Kip Hurd, Jeffrey Stouffer, Ken Almon, Gar … what a joy it has been! Can’t wait to do it again!” 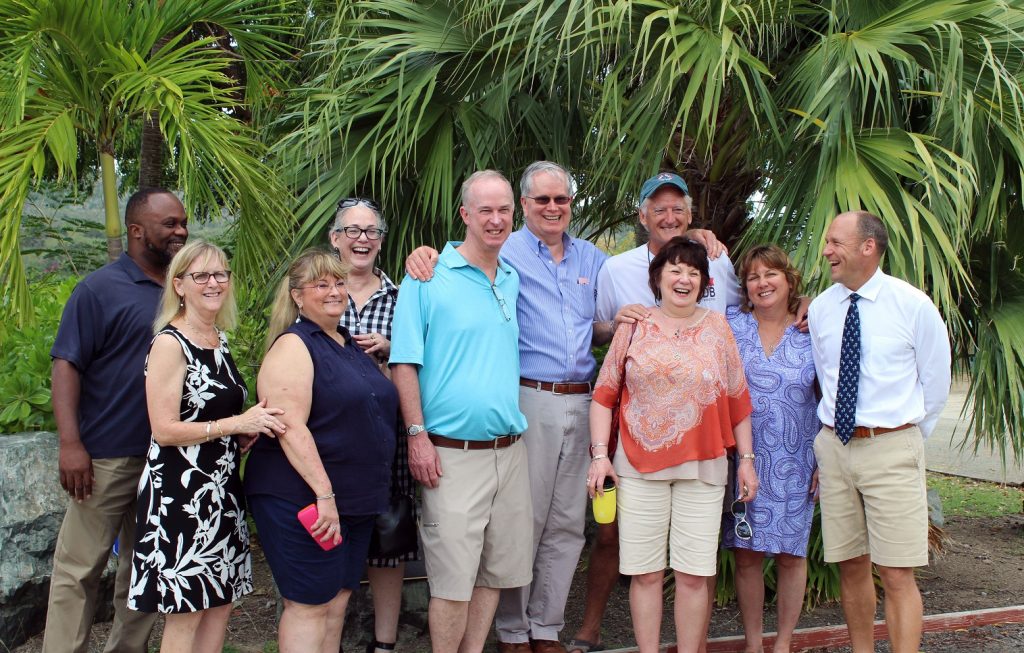 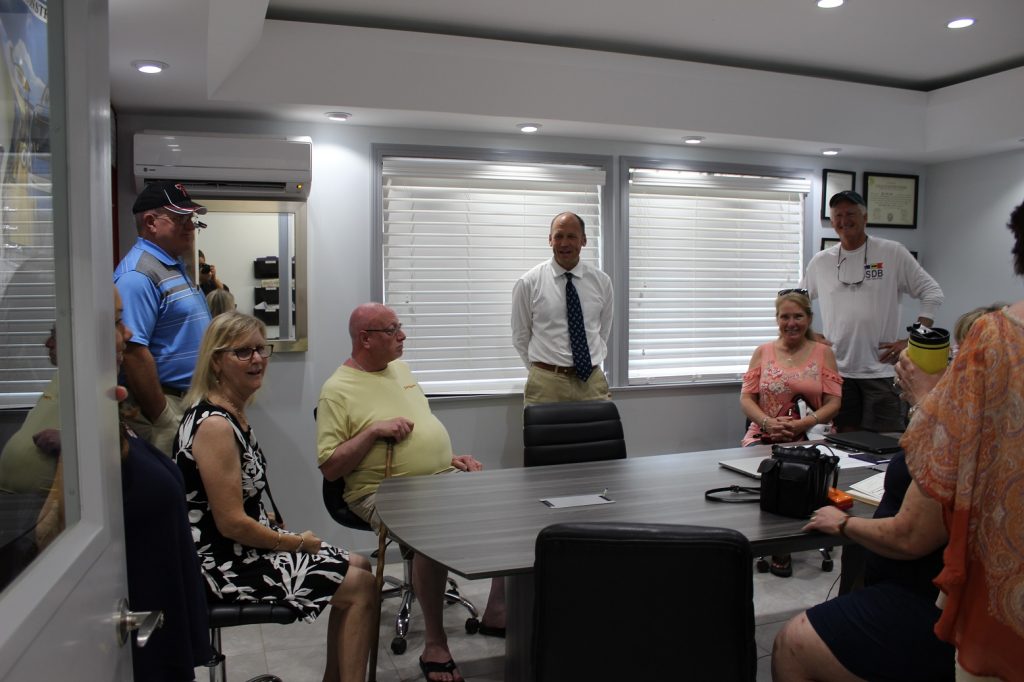 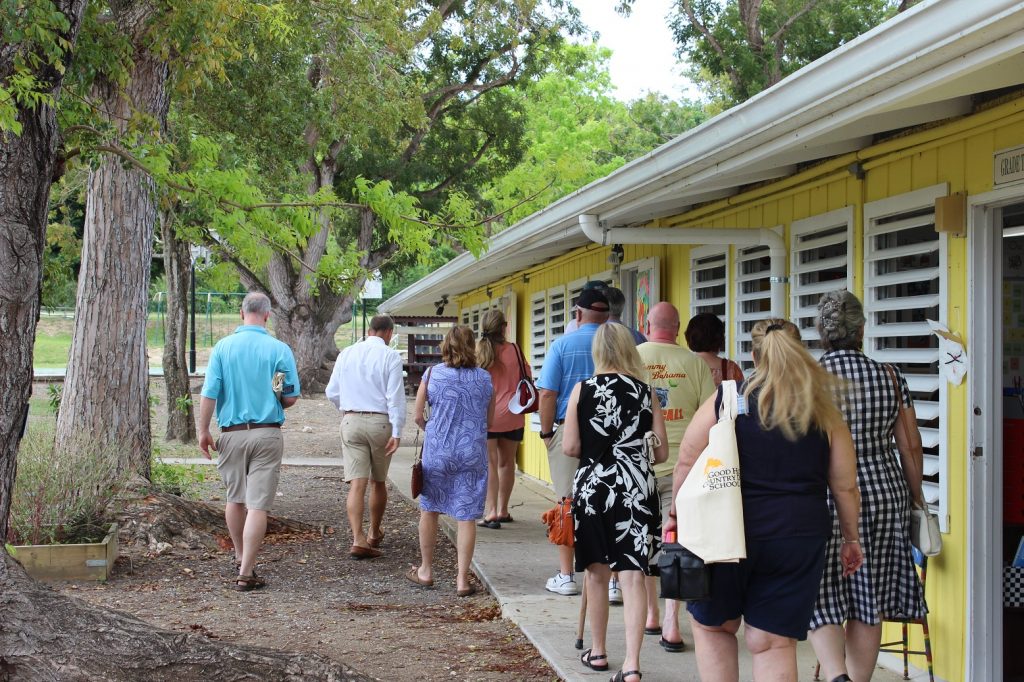 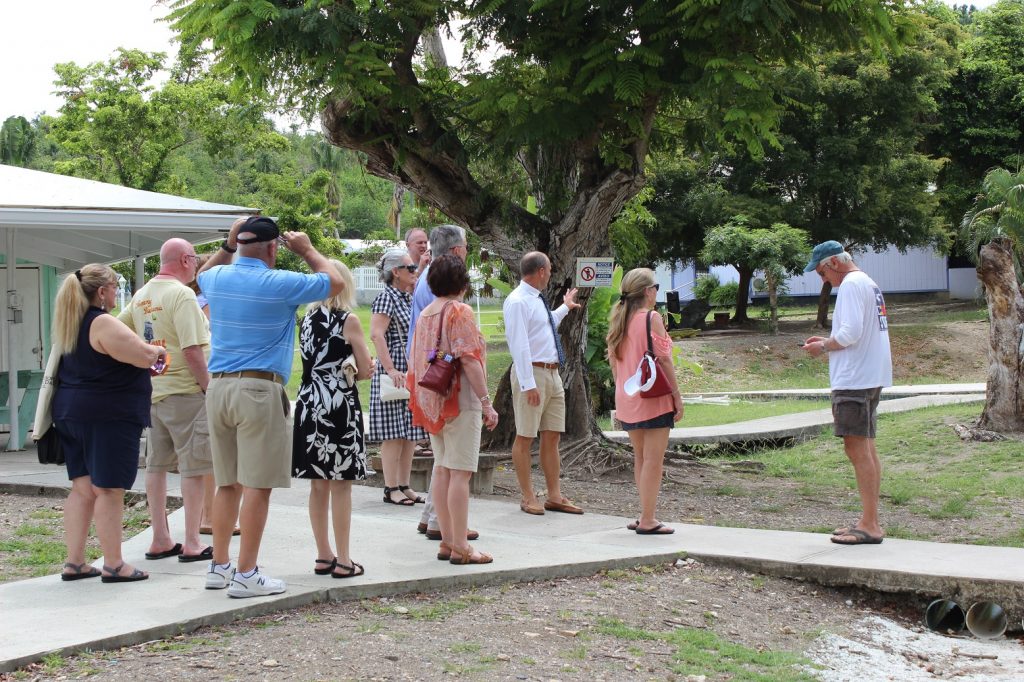 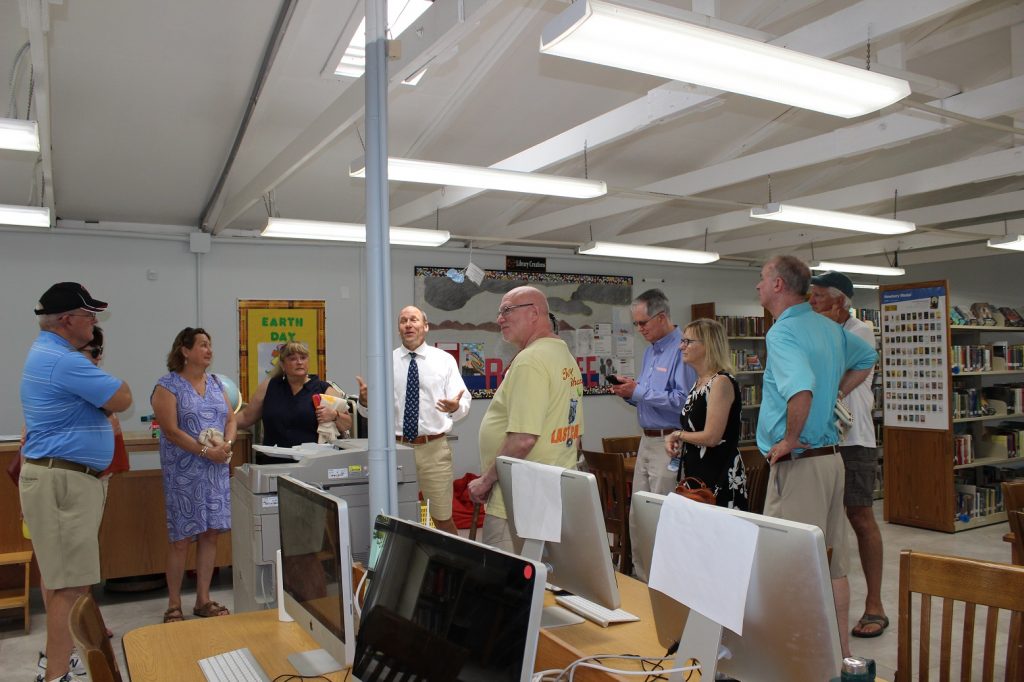