As we begin the second half of the 2018-19 school year, I wanted to encourage you to donate to the Good Hope Country Day School’s Annual Fund, the backbone of our fundraising initiatives and a critical part of our efforts to provide our students with a world-class education here on beautiful St. Croix.

Despite extraordinary challenges over the last three and half years—a smaller student population with an expanding range of needs and learning styles, arguably the toughest St. Croix economy in decades, and back-to-back Category 5 hurricanes that caused a third of our families to leave—we have systematically moved the school forward to ensure stronger infrastructure, programs, and personnel than in 2015. We have renovated the pavilion, main office, library, and front entry way; eliminated flooding; established back-up power for 15 of 17 buildings; and upgraded and expanded the wireless network. We have vertically aligned our K-12 math curricula and K-8 writing program, and we have begun investing in quality professional development to ensure effective implementation. We have increased faculty compensation three consecutive years (the first raises in half a decade), hired talented new team members, and provided faculty with laptops. We have also published the school’s first annual reports, hosted the school’s first off-island alumni events, and secured the two largest gifts in the school’s history

But we would like to accomplish so much more. Would you consider making a gift to this year’s annual fund to support our efforts? The easiest way to make a gift is by making a gift online at https://ghcds.org/supportghcds/annual-fund/.   To learn more about the importance of the annual fund, please select the GHCDS Annual Fund Q&A and see the Annual Fund Testimonial below.

Since December, I have had weekly calls with incoming head of school, Bill Bugg, to ensure a smooth transition. Moreover, I will be working this month with our lower and middle school leadership transition team and other faculty members to develop the best administrative leadership structure for GHCDS for next year. By making a gift to this year’s annual fund, you can help ensure that GHCDS has firm financial footing to continue building on our successes.

Thank you in advance for your consideration and support! 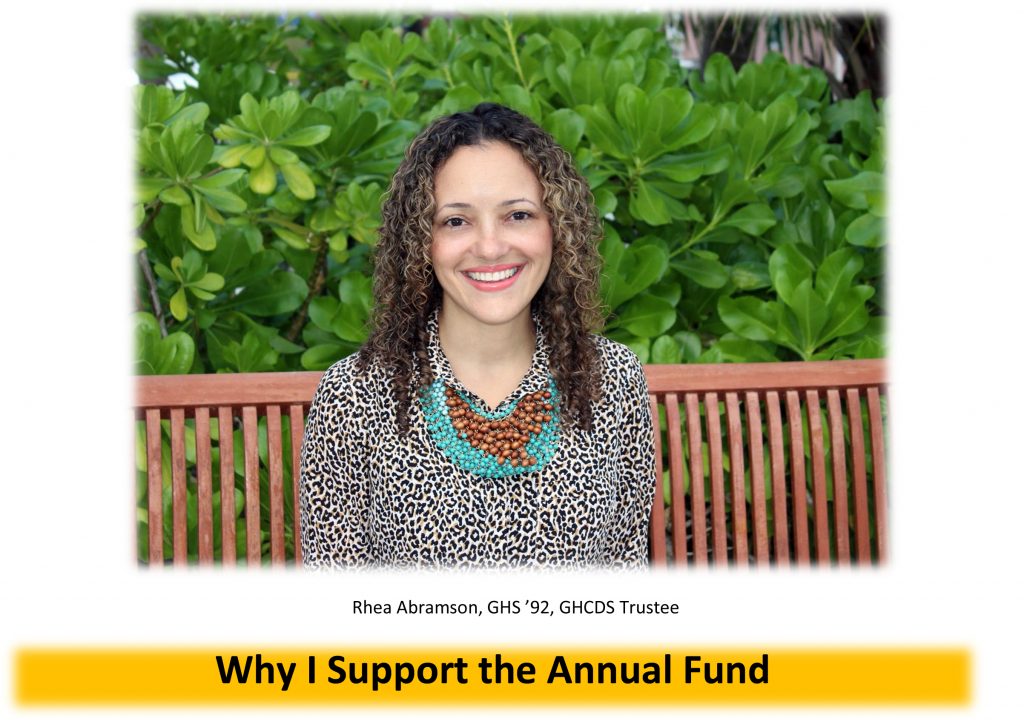 How did GHS impact my life?

I was challenged academically at every stage of my education by teachers who still stand out to me today.  I learned at GHS how to look at all walks of life with curiosity and compassion.  I developed rich relationships with my fellow students.  I learned how to conduct myself in an environment where the values of hard work, mutual respect, kindness, and excellence were demanded, practiced, and achieved.

Why I serve on the GHCDS board?

My 14 years at the Good Hope School were the most influential building block in who I am today.  Nature gave me the DNA of an entrepreneurial, get-things-done leader.  Nurture, which I received at GHS, gave me EVERYTHING else.  My exposure to theatre arts, sports, wide varieties of literature, oration, history, art appreciation, student government and interpersonal dynamics at GHS made me well-rounded.  The faculty expected the best from me and helped when I needed support and focus.  I feel when you are given the greatest of gifts, you have to give back.  I do not have any children at GHCDS but, I give my time to this board because of all the gifts GHS gave me. It feels like a debt that can never be repaid.

Why do I support the annual fund?

It is so important that there be an excellent college preparatory private school on St. Croix.  Those of us who were educated at Good Hope or Country Day have to give back in order to keep the new merged school running efficiently and to make it competitive with private institutions stateside.  My contribution to the annual fund is essential to the Good Hope Country Day School, similar to supporting locally-owned businesses; I feel great knowing that I have contributed to the institution that made me who I am.

Leslie Reed: CDS 2005
Bachelor of Arts in French and Anthropology with a minor in Dance from Cornell
She is an in house recruiter for a start-up in NYC. She is married to Josh Cormier who works for NBC

Jeff Manas – (CDS ‘98), and his son Vincent, enjoying the jungle gym on the GHCDS playground. 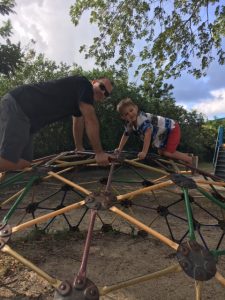 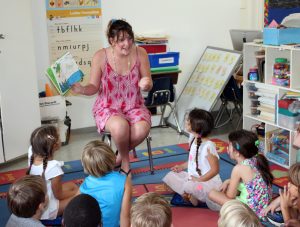 Alumni In the News 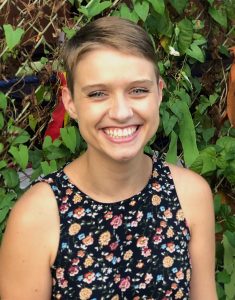 Alison Mahoney was selected from a record 370 applications to receive the prestigious Mitchell Scholarship, The Mitchell Scholarship, founded in 1998, sends future American leaders to the island of Ireland for a year of graduate study. It was named in honor of Senator George Mitchell’s contributions to the Northern Ireland peace process. Up to 12 Mitchell Scholars between the ages of 18 and 30 are chosen annually for one academic year of postgraduate study in any discipline offered by institutions of higher learning in Ireland.  Applicants are judged on scholarship, leadership and a sustained commitment to community and public service. The US-Ireland Alliance celebrates the 20th anniversary of its George J. Mitchell Scholarship program with the selection of the 12 members of the class of 2020 following interviews held in Washington, D.C. in late November, 2018.

Alison Mahoney was born in Albany, New York and attended St. Croix Country Day School from 5th Grade through her Junior Year.  She Graduated in 2010 from Walnut School for the Arts in Natick, Massachusetts. She is the Co-Founder and Artistic Director of Bluelaces Theater Company, a NYC-based company that produces multi-sensory, immersive theater for audiences with developmental disabilities. She is also the Manager of Accessibility at Lincoln Center, managing several programs including an internship program for young adults with developmental disabilities and a performance series for individuals with dementia. Once a week, she co-teaches theater classes for students with disabilities as young as 9 and as old as 87 with CO/LAB Theater Group. She became interested in arts accessibility at Northwestern University, where she graduated in 2014 with a double major in Theater and Gender Studies. In collaboration with Theater Stands with Autism (now Seesaw Theatre), Alison devised multi-sensory theatrical experiences for autistic children, the first of their kind at Northwestern. She will pursue an MA in Contemporary Performance Practice at Ulster University’s Magee Campus in Derry, Northern Ireland.

Ireland’s Ambassador to the United States, Daniel Mulhall, hosted a reception for finalists and alumni at his residence in Washington DC. Carolina Chavez, the Director of the Mitchell Scholarship Program, spoke of how the popularity of one of the most prestigious scholarships in the US continues to grow. A record number of 370 people applied for the 12 scholarships — a nearly 14% increase over the previous year and a 29% increase over 5 years. More than 200 Congressional districts and an equal number of colleges and universities are represented in this year’s applicant pool. Recipients are chosen on the basis of academic distinction, leadership, and service.

Members of the 2020 class include a recent intern for Ambassador Nikki Haley at the US Mission to the UN, who also combats political polarization in the United States; a researcher on the gut microbiome; two theater practitioners; a journalist and researcher, currently working on an upcoming Netflix documentary series on the 14th amendment; two reproductive rights advocates; and the co-president of Columbia University’s chapter of Lean In, who is interested in the philosophical implications of artificial intelligence.

Sponsors of the Mitchell Scholarship program include Ireland’s Department of Education and Skills, Morgan Stanley, Pfizer, and the American Ireland Fund. The Scholars will begin their studies in Ireland in September 2019.

Congratulations to our collegiate swimmers at the 2019 MAAC Swimming & Diving Championships in Buffalo, NY! 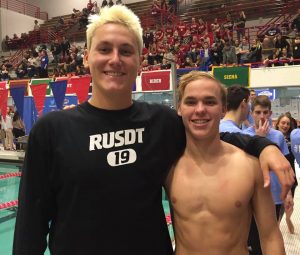 Matthew Mays ( ’17) was part of Bryant University’s championship team, which placed 2nd this year, the highest placing in team history! Matthew was part of 2 conference record setting relay teams (200 & 400 yard medley relays), and won medals in the 200 & 400 yard freestyle relays. In his individual events, Matthew set a new conference record in the preliminary session in the 200 yard backstroke (previous record from 2009), placing 3rd in the event at finals. He also won medals in the 200 yard IM (3rd place) and 100 yard backstroke (2nd place)! 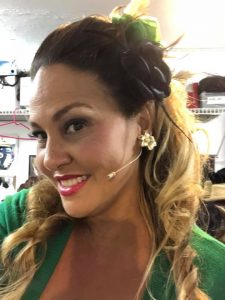 Congratulations to the cast and crew of the recent Caribbean Community Theatre production of Guys and Dolls, co- directed by our extremely talented alumna, Leslie Carter-Highfield!  Thank you for keeping the arts alive on St. Croix! 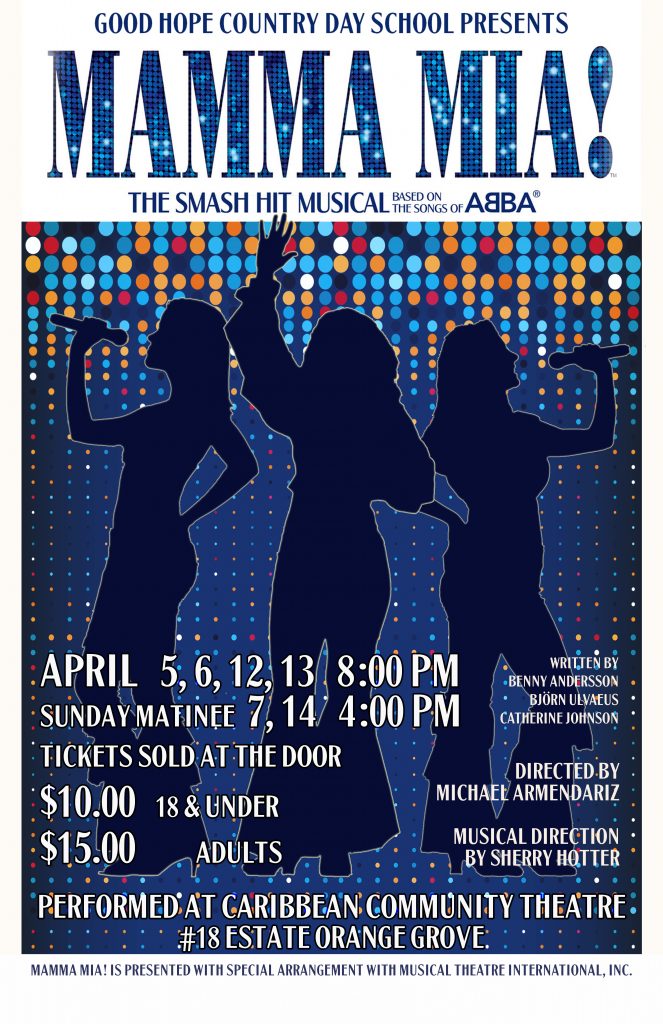