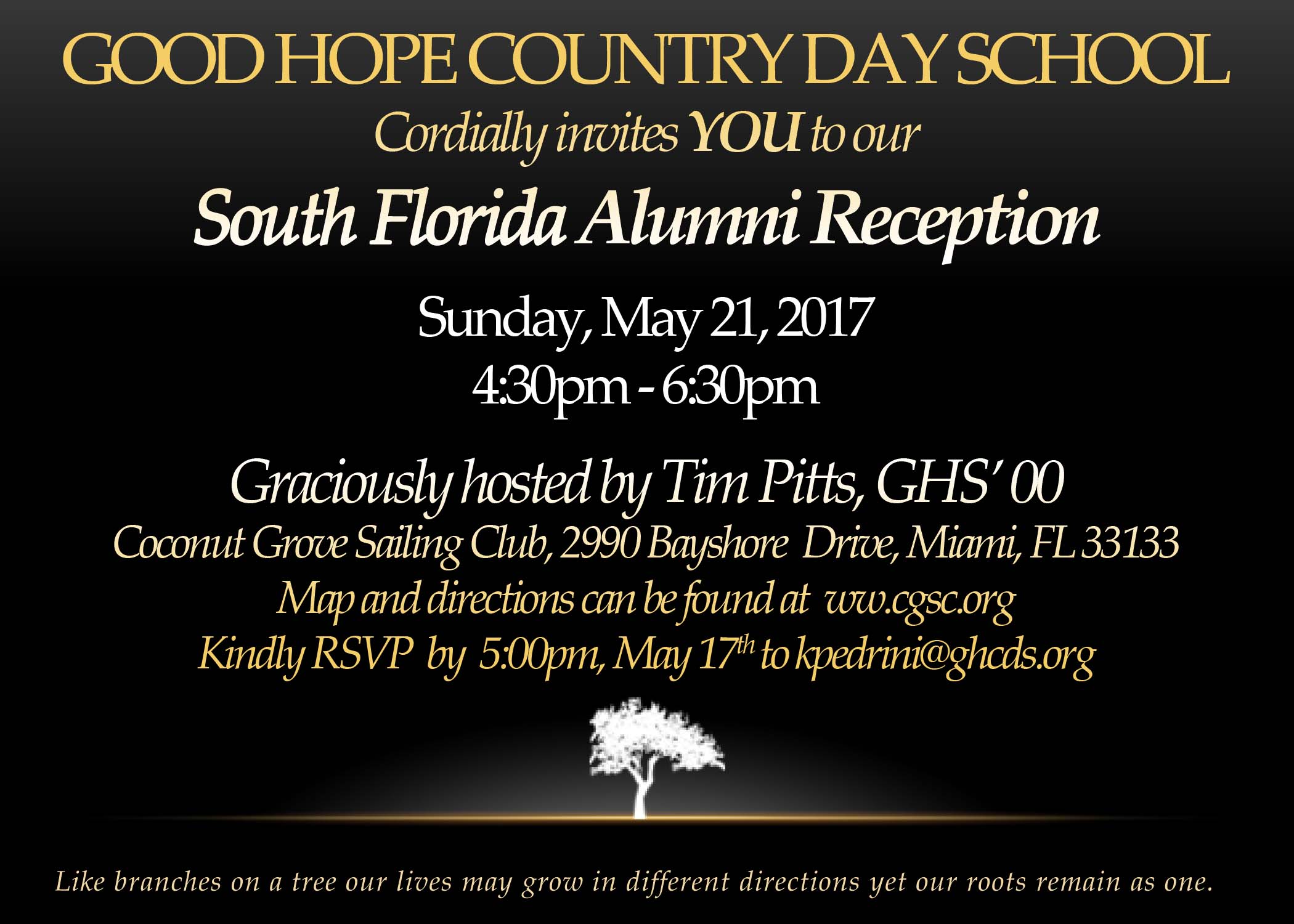 Spring is in the air on St. Croix! As you all know, this is such a gorgeous time to be out watching a soccer match, reading with a book buddy under a shady palm tree, or simply having a slice of pizza at the snack shack with friends. It’s also a great time to be exploring off campus and even off island, the perfect segue to Mini-Gusto!

Mini-Gusto Week, which took place this year March 13-17, is generally regarded as one of the top GHCDS experiences. To help you travel down memory lane, we are sharing Summary Reflections from 9th-12th graders who participated in everything from minor surgeries to kayaking tours. I hope you enjoy seeing the amazing range of experiences available to our students.

(Click here) to see the compilation of Mini-Gusto Reflections from our upper school students.

On a different note, our final alumni reception of the school year will be held in Miami on Sunday, May 21, thanks to Tim Pitts, GHS ’00. We are excited to connect with the many graduates in South Florida! 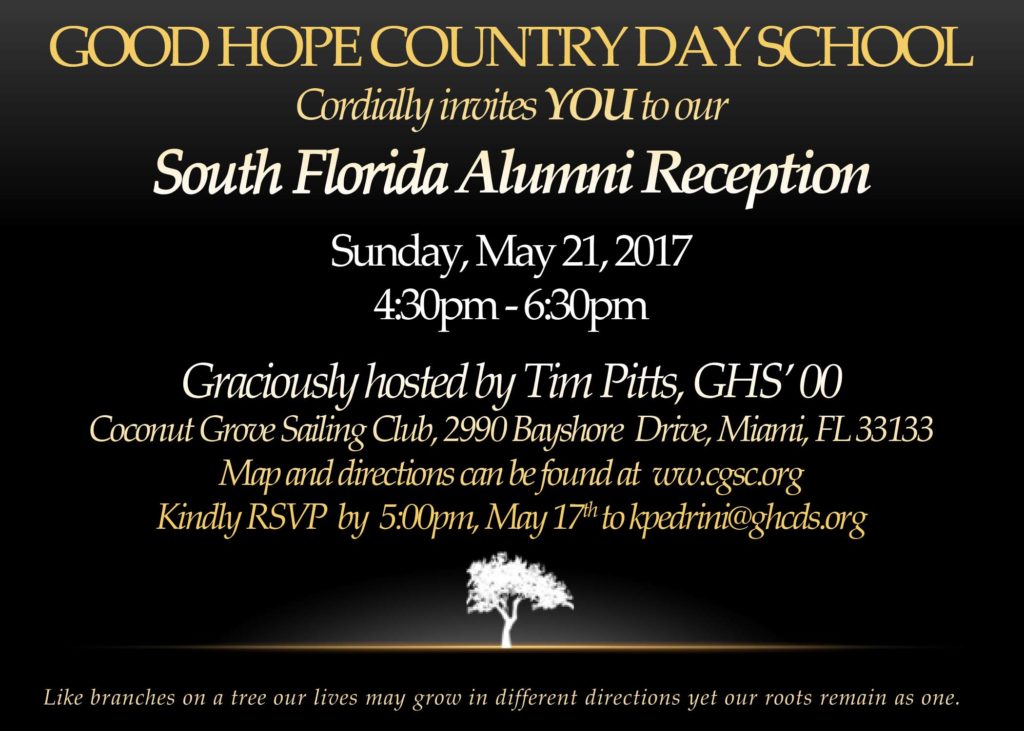 Lastly, I thought I’d share a small sample from this year’s Senior Prank. This poster covered our GHCDS entry sign. 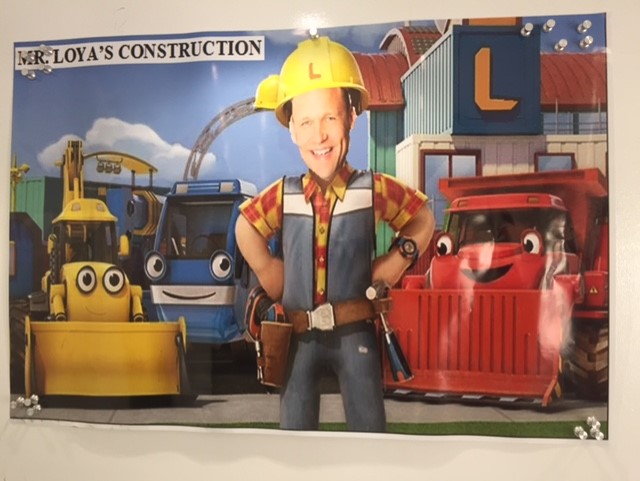 I must say that this is an unfair compliment. I’m pretty sure that Bob the Builder completed all his projects in every 30-minute episode. Our flood mitigation, plumbing, and other projects, however, seem to run on and on… J

We are currently looking to hire excellent candidates for the positions listed below and appreciate any referrals: 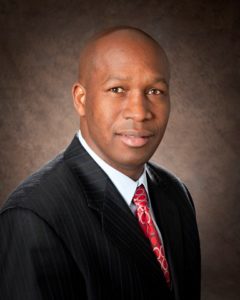 Erwin Raphael is a veteran automotive industry executive with over 25 years of experience in various aspects of the automotive industry.  Currently, he is the General Manager of Genesis Motor America, LLC, and resides in Irvine California with his wife Tracy Davis.    Erwin is a proud product of Good Hope School, on St. Croix, which he attended from 1976 thru 1980.  He later went on to graduate from St. Dunstan Episcopal School, in Christiansted (Class of ’84), but he has many fond memories of his formative years at Good Hope School.  He also has many memories of being a member of the St. Croix Dolphins with their training facility at Country Day School. Now that the two schools have merged, he is anxiously anticipating the great leaders that will come out of the new, combined Good Hope Country Day school.

Erwin and his family emigrated to St. Croix from Dominica, when he not yet quite 2 years old.  In the years to follow, Erwin and 5 of his 6 brothers, LeRoy, Samuel, Derek (Alula), Desmond and Isaac attended Good Hope School.  Micah, the youngest, completed all of his education at St. Dunstan Episcopal School, near Christiansted.  Their parents, Thomas and Martha Raphael, still live in the home where Erwin and his 6 brothers were raised on St. Croix.

While at Good Hope School, Erwin learned to love math and science and also developed a great appreciation for sports such as football, basketball, swimming and golf (ok, and dodgeball and whatever that Frisbee game was, as well).  The point is that Erwin never let go of the Falcon Spirit, the one that taught him to rise above challenges and see opportunity where others see problems.  He loves telling stories about his teachers (Mrs. Levins, Mrs. Redfield, Ms. Savard, Ms. Alred, Mr. Cruz, Ms. Lee, Mr. Vasbinder and Mrs. Watlington, to name a few)

That same spirit carried Erwin to the University of Maryland and then to The Ohio State University, where he completed Undergraduate degrees in Math and Chemical Engineering, as well as graduate studies in Economics.  When he wasn’t in class or studying, Erwin kept busy working part-time jobs to help fund his education.  Eventually, Erwin enlisted in the US. Army, primarily as a way to continue funding his education.  His service in the Army was primarily a means of funding his education, however Erwin now credits much of his courageous leadership and self-confidence to lessons learned while serving in the US Army.

Upon Graduation from The Ohio State University, Erwin accepted a position as a mathematical modeler for the Environmental Protection Agency.  That career opened up doors to the manufacturing world where he worked as an engineer at the International Truck and Engine Company.  After a few years he was recruited to lead the Plant Engineering Organization for Toyota Motor Manufacturing in Princeton, Indiana.  Then Raphael was recruited by what is now Fiat Chrysler Automobiles (Daimler Chrysler, at the time).  After 11 years in positions of increasing responsibility, including being the General Manager of the McGraw Glass Plant, then the Jefferson North Assembly Plant) where almost 1,000 new Jeep Grand Cherokees were made daily, then to Sales and Marketing and finally to a senior position responsible for Corporate Quality.

In 2010 Erwin was offed the position of Director of Engineering and Quality for Hyundai Motor America in Southern California.  It was during his leadership the Hyundai vehicle quality improved to its current level, with industry-wide recognition as being among the best in the world.  Finally, in November, 2015, Hyundai announced that a new Luxury Automotive Company would be created on the heels of its successful Genesis Model.  And, thus, the Genesis Brand was launched and Erwin Raphael was named Executive Director and General Manager of Genesis for the USA.

Erwin is often asked what the secret to his career success is.  Although he cannot point to a single specific item, he believes that the secret is partly because of his strong cultural background and the sense of belongingness that he acquired early in life.  He also gives credit to his faith in God, strong work ethic and determination to be courageous and do whatever is required to be the best that he can be.

Erwin and his wife, Tracy Davis, have 2 adult children, Malaika (23) and Haleigh (22) who were both born in Columbus Ohio, and in whom now lives the spirit of the Falcon that was put into their father during his years at Good Hope School. 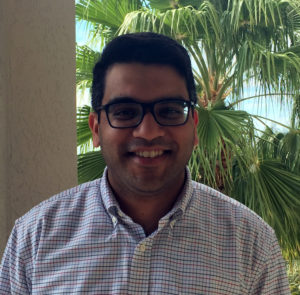 I graduated from CDS (’01) and studied bioengineering at the University of Pennsylvania (’05) and then went on to study medicine at New York University (’10). Growing up on St. Croix and attending CDS have both been continued sources of inspiration for me. My time in Roger Summerhayes’ classroom formed the backdrop for my interest in science and chemistry. I believe that formative experience led me to pursue training in nephrology, which is perhaps what many doctors would say is the most physiologically oriented and quantitative subspecialty in medicine. I continued an academic career in laboratory research for a short while and then changed career paths to the opposite spectrum within medicine by training in hospice and palliative medicine. I hope to pursue clinical research in how this field overlaps with nephrology. My junior faculty career will be dedicated to better understanding how we can treat chronic kidney disease for elderly and frail patients without resorting to dialysis as the default option. I currently work at the University of Pennsylvania and live in Philadelphia with my wife and 2 year-old son.

It has been a pleasure seeing CDS grow into GHCDS. Younger cousins, nephews, and nieces of mine have attended the school. GHCDS is a remarkable place with gifted students and truly phenomenal teachers. The combination of a breezy island with a friendly culture provides the perfect setting for motivating students through a rigorous curriculum. I believe my Crucian background and GHCDS education has enabled me, and countless others, to have rewarding, fulfilling lives and careers. 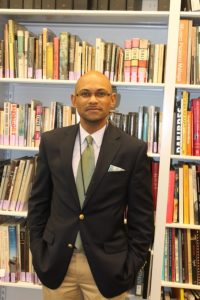 Francis Tobienne, Jr. Ph.D., was born in St. Croix, Virgin Islands in 1975 and grew up on the Isle of Seven Flags. A scientist, poet, linguist, cultural philosopher, literary critic and painter he received a Trinity College Fellowship to study at Trinity College in 1994 and a Purdue Doctoral Fellowship to do his doctoral research in West Lafayette, Indiana in 2007. He received his doctorate and a Graduate Certificate from Purdue in 2013 and published his first book, The Position of Magic In Selected Medieval Spanish Texts, in 2008 while still a Master’s student. In 2014 he was unanimously elected to Phi Beta Kappa upon the nomination of Dr. John J. Contreni, then Justin S. Merrill Dean of the College of Liberal Arts | Purdue.

In 2010, he articulated the Mission Statement for Team Dalí, a partnership between The Salvador Dalí Museum (DM) and University of South Florida—St. Petersburg, and still serves as a Founding Member in his role as Senior Research Fellow at the DM. His best known works to date include: The Position of Magic In Selected Medieval Spanish Texts (2008), “Cellular Imitation and Violence Toward the Neighbor” in René Girard & Creative Mimesis (2013), Occultus: the Hidden and Macabre in Literature and Film (2016), Mandeville’s Travails: Merging Travel, Theory and Commentary (2016), “Wonder Woman Matters: pathos and sophia” in Wonder Woman &  Philosophy (2017) and “Charting Chaucer: Travel, Mechanical Magic and Controlling the Narrative” in Critical Insights: Chaucer (2017).

An avid traveler, Dr. Tobienne continues to publish, teach and research throughout Florida, Massachusetts, the Caribbean, England and Ireland.

What are your fondest memories of the school?

What were your biggest challenges?

I think balancing “fun” with “work” as if these two remained anathema to my existence. I learned this lesson a little too late I think. Now, looking back at CDS (’93) I can’t believe how these two have become one.

What are you most proud of from your time at the school?

Being able to travel to New England and come to find out the name of our school is known there amidst places like Phillips Academy–Andover or Amherst! Small world indeed.

What student work are you most proud of?

My diploma of course because it preserved my status as graduating from CDS, a Tiger!

Whom among your colleagues did you most admire and why?

Honestly, I always admired the eighth graders because of their impending shift to HS. It is a fond memory of mine: having to shift from 8th grade to becoming a freshman. Epic.

What was your favorite part of the campus and why?

Most certainly our Olympic-sized pool and being a part of the Dolphins.

What was your favorite event on the school calendar and why?

Of course, mini-gusto wins hands-down; although, Orange and White Day was a close second.

What led you to your career path?

My syncretism in HS led to my left-brain, right-brain existence today. I never settled on just 1 thing; I became a biochemist, a professor, a scholar, a poet, an author, a painter and traveler (receiving awards in the afore stated).

What are you doing nowadays?